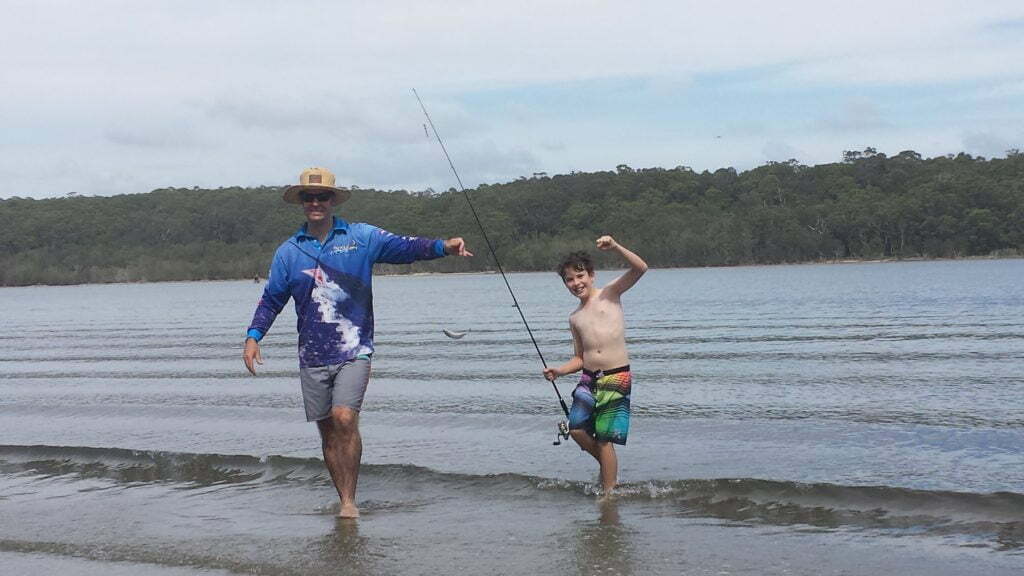 Explore. Cast. Discover. Recover… the value of fishing for our mental health

I came across this great article from my good friend Matt Barwick all about the value of fishing for our mental health.  I know that when I camp near a river my shoulders relax, life slows down and I feel good.  It seems I am not the only one…  The photo above is quite a few years ago when my son Finn caught a fish – see the delight on both his and my husband Tom’s faces.   Read on to see the great work that is being doing to encourage men in, particular, to get out into nature and try fishing as a way of reducing stress and reconnecting with nature.

If you’re reading this then you probably know that feeling of slipping silently into a clear shaded pool, scanning the different backwaters, rock chutes and foaming eddies before firing out that first cast, landing sweetly up in a small sluggish pocket amidst fast water…before twitching that lure back into deep, dark, slower moving water, eyes fixed intensely… waiting expectantly for that ever-imminent, crashing take…

…And you know in those moments how your mind drifts back to the report you need to send to that demanding client by next Tuesday? No? Me either. Neither does anyone else who fishes, for that matter. That’s because, to quote one incredibly wise human – who evidently also makes bumper stickers –

Fishing has a way holding all of our troubles, anxieties and stresses at arm’s length for a while, giving us a much needed gulp of sanity amidst the swirling craziness of modern day life. And now a recent study by researchers from Western Australia’s Curtin University adds weight to this long-held anecdotal belief shared by fishos everywhere. Led by Professor Alexandra McManus, a research team recently surveyed over 600 respondents between Kununurra to Esperence in Western Australia to find out more about why they fish, and the benefits received. And perhaps not surprisingly, relaxation and stress relief were the most commonly reported benefits, along with positives associated with being outdoors in the fresh air, getting good exercise, and benefits for mental health. In general, 75.8% of those surveyed reported that fishing contributes to a “positive state of mind”.

It seems that these wellbeing benefits may span cultural and socio-economic divides too… One study comparing motivators for fishing among artesinal subsistence fishers in the Solomon Islands to those of recreational fishers in northeastern Australia found that 75% of motivators driving these groups were in fact the same, and even people fishing for survival in developing nations enjoy positive state of mind benefits, in addition to a meal. What’s more, the research team observed that fishing provides a means for young men in the Solomons to vent teenage angst in a safe environment, perhaps reducing anti-social aggressive behaviour.

The role of fishing in helping men at various stages of their lives to let go of feelings of anger, depression, anxiety and stress on returning from warzones has also been demonstrated by researchers in the United States. In one study, 69 war veterans participating in an inspiring program called ‘‘rivers of recovery” were taken on a two-day fishing retreat, before and after which they were psychosocially assessed to record their mood, anxiety, depression and stress levels. And the findings were amazing: indicators relating to feelings of anxiety, depression, guilt, stress, hostility, fear and sadness reduced significantly immediately after the fishing trip. But what’s more, they stayed that way when re-sampled one month after the fishing trip. Is this a smoking gun showing fishing to be a critical antidote to the horrors of war?

The significance of fishing as a mental multivitamin in our modern day society is not to be underestimated. We now know that around 20%, or 1 in 5 Australians suffer from mental health challenges. And a national stress and wellbeing survey conducted annually since 2011 reveals that Australians are now experiencing lower levels of wellbeing and workplace wellbeing, as well as higher levels of stress, depression and anxiety symptoms compared to when these surveys began five years earlier, with younger people consistently faring worse than older Australians, and unemployed people faring worst of all.

So if we are all increasingly stressed out, anxious and unhappy, and fishing helps improve our state of mind, the burning question is why aren’t more people out there wetting a line? To the contrary: most surveys monitoring participation in recreational fishing have actually reported declines in recent years. Well it seems the survey by folks from Curtin University can offer some insights here too. Of the 600 Western Australians surveyed, 40.5% experienced their first fishing trip with a family member, whilst only 2.6% did so without a family member. And around 95% of respondents experienced their first fishing outing by the age of 14.

What this shows, is that many Australians from families who don’t fish just don’t have access to pathways most trodden by those who come to discover the joys of fishing. And so many are missing that critical window in their early life during which exposure to fishing can shape lifelong habits and behaviours to help them cope with stress and challenges of their future daily lives… Put simply, if we reach our teenage years and puberty kicks in without us first knowing the adrenalin-filled excitement of a crashing surface-take, we start chasing the opposite sex rather than an early morning hatch, and the doorway through to a lifetime of fishing adventures closes for many. Often, for good.

Fortunately, there are amazing programs emerging around Australia to help share the benefits of fishing, such as The Fly Program, a brilliant not-for-profit initiative to help Australian men find a release in fishing and the outdoors to help them deal with the day-to-day challenges faced in our community, and the burden of mental illness. Many peak recreational fishing bodies throughout Australia are also forging new pathways to connect younger generations with fishing through clinics and school-based programs.

One thing is for sure: the turbulent, roaring rapids of our daily lives, fuelled by social media, a 24-hour-newscycle, and a quickening work-hard, play-less culture is unlikely to slow down any time soon. And so we need to ensure what free time we have is invested in things that sustain and feed us, literally and spiritually.