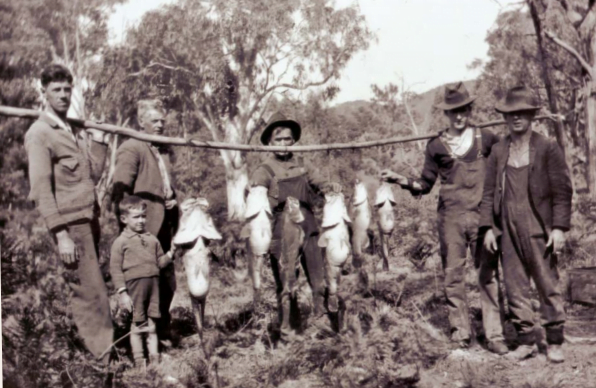 “Dad used to catch the Catfish out of the lagoons, he said once to me ‘I wonder if there are any of them left in the lagoon?’… I’ve never caught one.” – Len Lebner

The next installment of our journey through True Tales of the Trout Cod: River Histories of the Murray-Darling Basin takes us to the Upper Murray River Catchment.

Surveys conduced in 2008 found that less than half the predicted native species were present in the Upper Murray, and that alien species, mainly trout, made up 96% of total biomass and 74% of total abundance. Will Trueman’s investigation of the fish of the Upper Murray River Catchment shows that this wasn’t always the case.

In this collection of oral histories, newspaper articles and photos Will shows that that many species of fish, including Trout Cod, Murray Cod, Macquarie Perch, and Blackfish, were abundant and widely distributed.  In 1889 a large flood in Albury recorded stories  of Murray cod being in such high numbers that they were swimming around the streets of town! 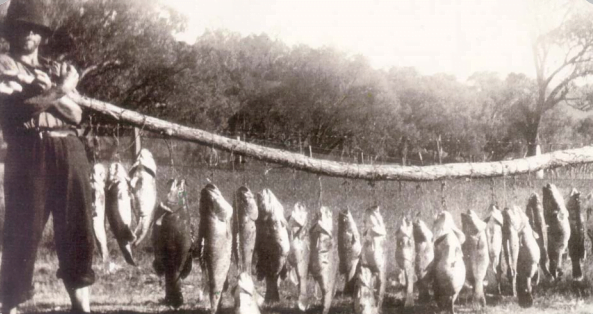 Many who shared their oral histories as part of this river history recall the ease of catching fish as children:

“In 1930, we would grab a Stringybark sapling with a cord, hook and sinker and away we would go down to the river with  few worms. We would get two cod nearly every evening. Cod was what we caught most at Burrowye. When I was a boy the rock cod was very common, even more common than the Murray Cod. The rock cod were throughout the river, int he same places as the Murray Cod, but sometimes in the faster water…” – 2006 Oral History from Roy Grant (age 90)

“The cod were common when I was a kid. Up to 20 pounds, some up to 60… We never really caught small cod…. the Macquarie Perch, I’ve never caught many of them….I’ve caught plenty of redfin, going back 60 years. They’ve always been common, heaps of them, going back as far as I can remember.” – 2006 Oral History from Tom Jarvis (age 77)

Ladies preparing a picnic on the Indi River c1914. What a picture of life on the river! 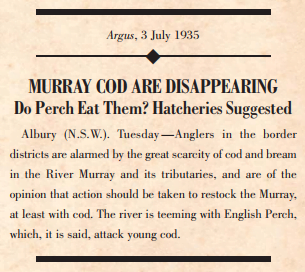 Tom Jarvis recounts the changes in the river – with the introduction of the snowy scheme, and the arrival of carp:

“When the Snowy scheme came in, well the water was too cold, and got too cold too quick. And the snags, well they pulled them out for the Snowy scheme…When the water got cold, the trout, well that was nearly all you could catch..Then the carp came in. The water used to be clean here. I’ve been on this property for 50 years. Now the water is dirty…” – 2006 Oral History from Tom Jarvis (age 77)

By the 1970s, the native fish population of the region was restricted to relatively small numbers of Blackfish, and relic populations of Murray Cod in the Murray River and Macquarie Perch in the Mannus Creek. The populations of Trout Cod, Golden Perch, Silver Perch and Catfish in the upper Murray had become extinct.

Download the full booklet here to read more fabulous fishing stories or listen to Will in the video while he explains what he discovered in this great river reach.