New series of No Bystanding Workshops 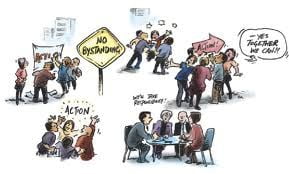 Recently I have been reading Edward O Wilson’s ‘The Social Conquest of the Earth.’  He believes ‘we live in a world of stone age emotions, medieval institutions and god like technology’ and if history is any guide it’s a scary combination. Why stone age emotions? Our decisions are shaped by our emotions to a much greater extent than we have previously understood. Although the potential is there for wisdom, it is rare. Why god like technology? In addition to producing weapons of total destruction science and technology (S & T) have produced amazing results but they have also produced an almost blind faith (by denialists) that should climate change become a reality S & T will come to our rescue. Why medieval institutions? Because our organizational structures perpetuate societal dysfunction and bystander mindsets. Chris Argyris first wrote about the problems of pyramidal (hierarchical) structures and their impact on personality in the 1950s. He suggested that the pyramidal organisation fostered systemic immaturity and that dysfunctional behaviour was a natural consequence.

But they needn’t. New mindsets combined with new structures can present new possibilities. They make it possible to help all of us move from being bystanders to being more engaged in building a sustainable planet. If you would like to know more check out www.nobystanding.net