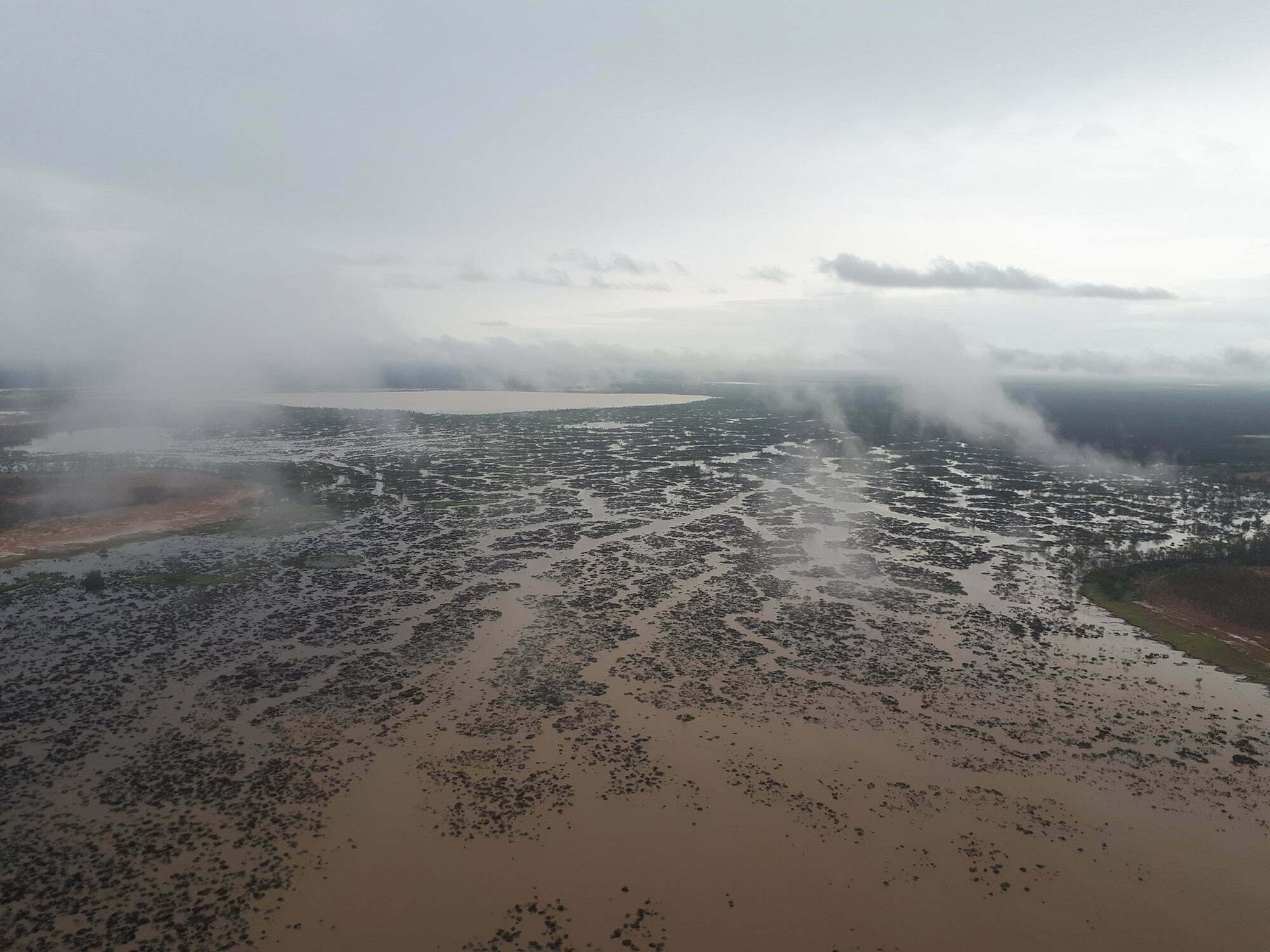 The origin of the Narran Lake – Dharriwaa Creation Story

The Commonwealth Environmental Water Holder’s Lower Balonne Flows are continuing to fill the Narran Lakes. Most of the flow has now passed from the Queensland reaches of the Lower Balonne into New South Wales.

As of 6 April, 89 Gigalitres (GL) has passed the Wilby Wilby gauge on the Narran River, with around 60 Gigalitres reaching the Narran Lakes so far. Waterbird breeding habitat has received a good watering, and we can see the difference the water has made in the two satellite images. The water in the Narran Lakes will persist for months, supporting birds, fish, vegetation and other wildlife. 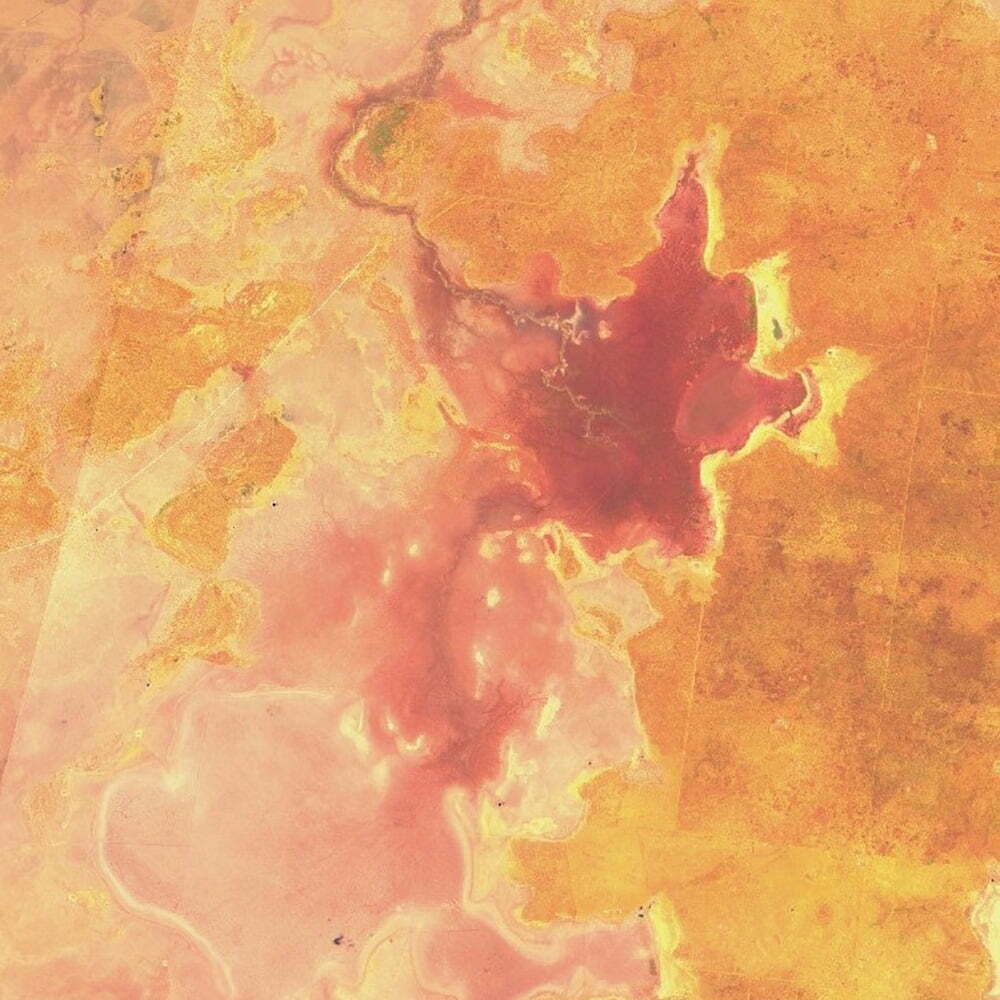 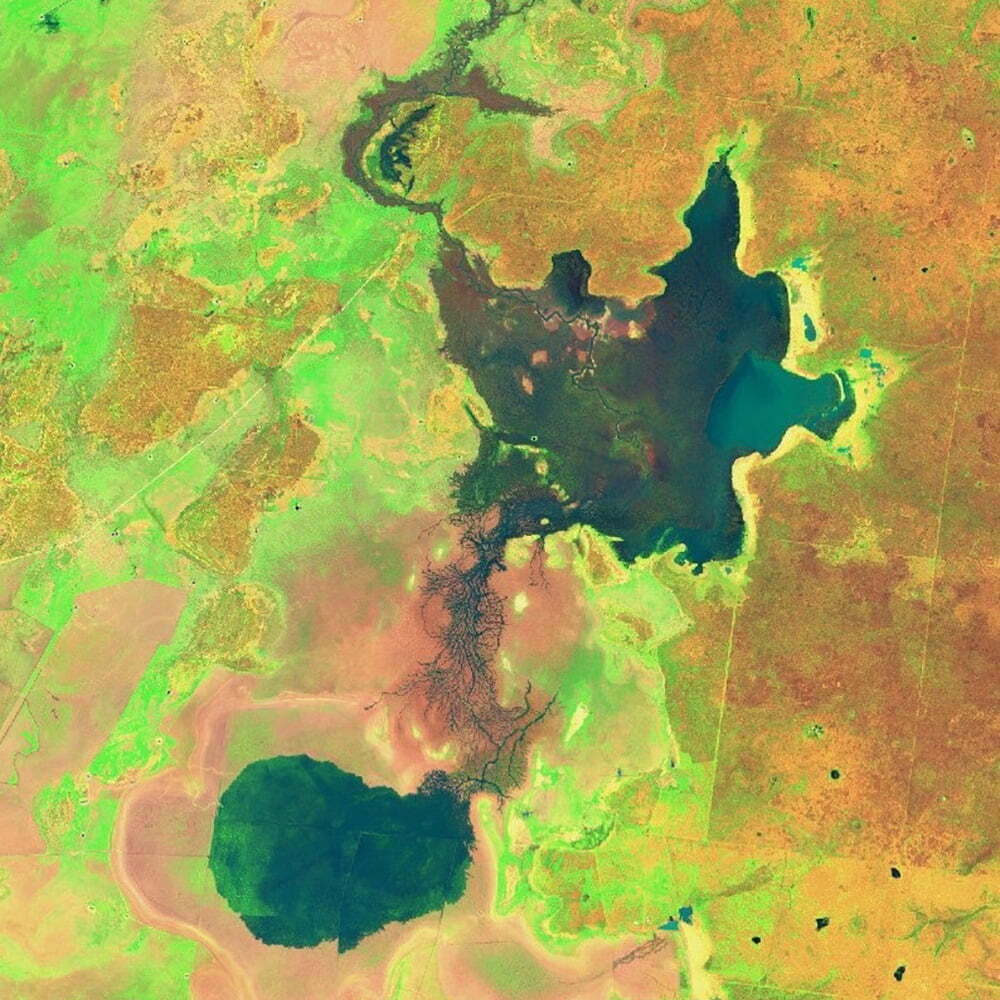 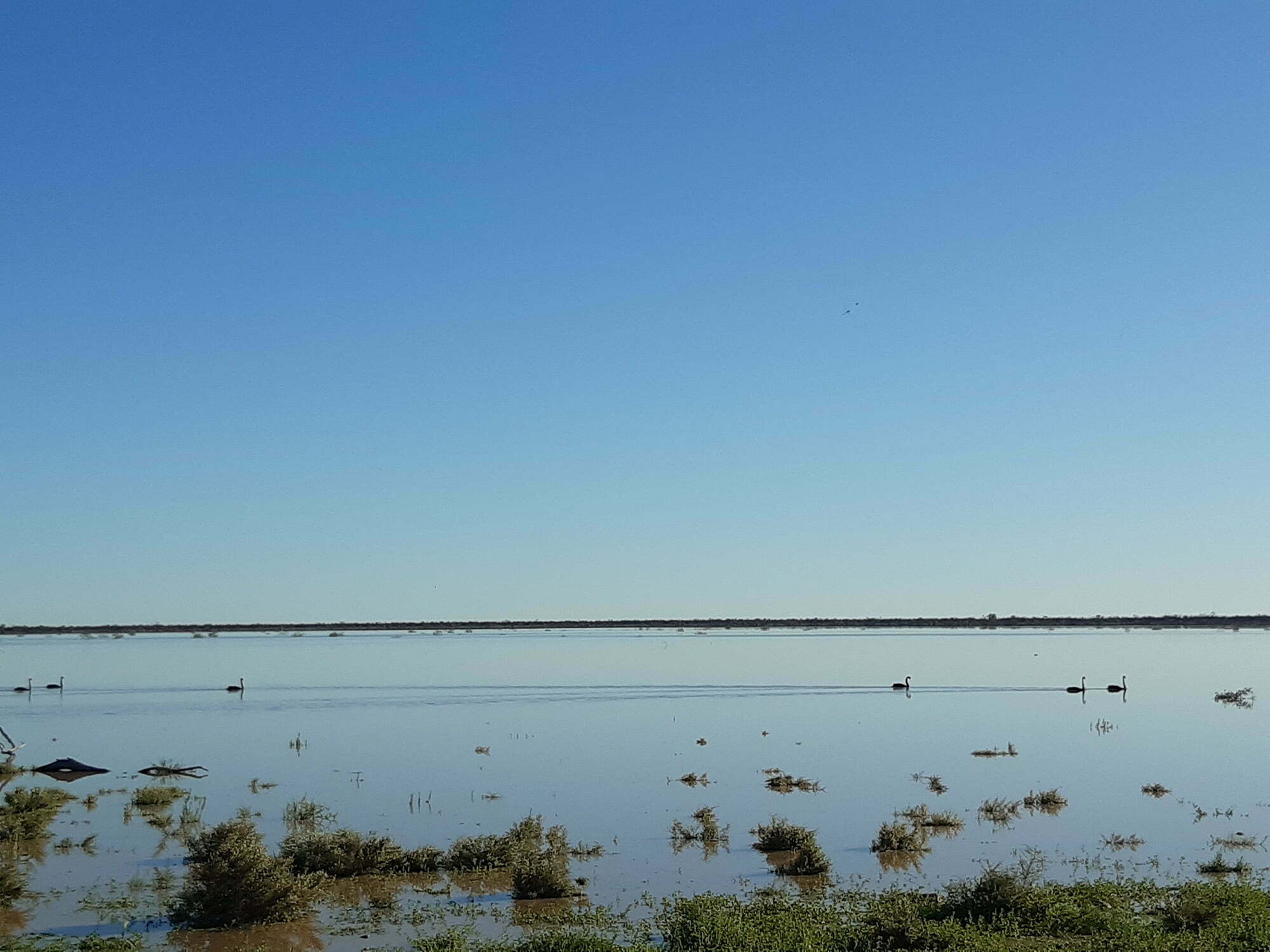 The Narran Lakes are culturally very significant. Dharriwaa has been an important site to Aboriginal groups for thousands of years – as a meeting place for people and animals alike. But how did Dharriwaa come to be? Here is the story…

“While I go for the honey, go you two out and get frogs and yams, then meet me at Coorigel Spring, where we will camp, for sweet and clear is the water there.”

The wives, taking their yam sticks, went out as he told them. Having gone far, and dug out many yams and frogs, they were tired when they reached Coorigel, and, seeing the cool, fresh water, they longed to bathe.

Byamee was supposed to meet his wives back at Coorigel spring. However, whilst bathing in the sweet and clear water, Byamee’s wives were seized and swallowed by two kurreahs (crocodile like creatures). The kurreahs then dived into an underground watercourse, which led to the Narran River – drying all the watercourses along the way.

When Byamee reached the spring and realised what had happened he started in pursuit of the kurreahs. He soon reached the deep hole where the underground channel of the Coorigel joined the Narran. There he saw what he had never seen before, namely, this deep hole dry. And he said:

“They have emptied the holes as they went along, taking the water with them. But well know I the deep holes of the river. I will not follow the bend, thus trebling the distance I have to go, but I will cut across from big hole to big hole, and by so doing I may yet get ahead of the kurreahs.”

On swiftly sped Byamee, making shortcuts from big hole to big hole, and his track is still marked by the morilla ridges that stretch down the Narran, pointing in towards the deep holes. Every hole as he came to it he found dry, until at last he reached the end of the Narran; the hole there was still quite wet and muddy, then he knew he was near his enemies, and soon he saw them. 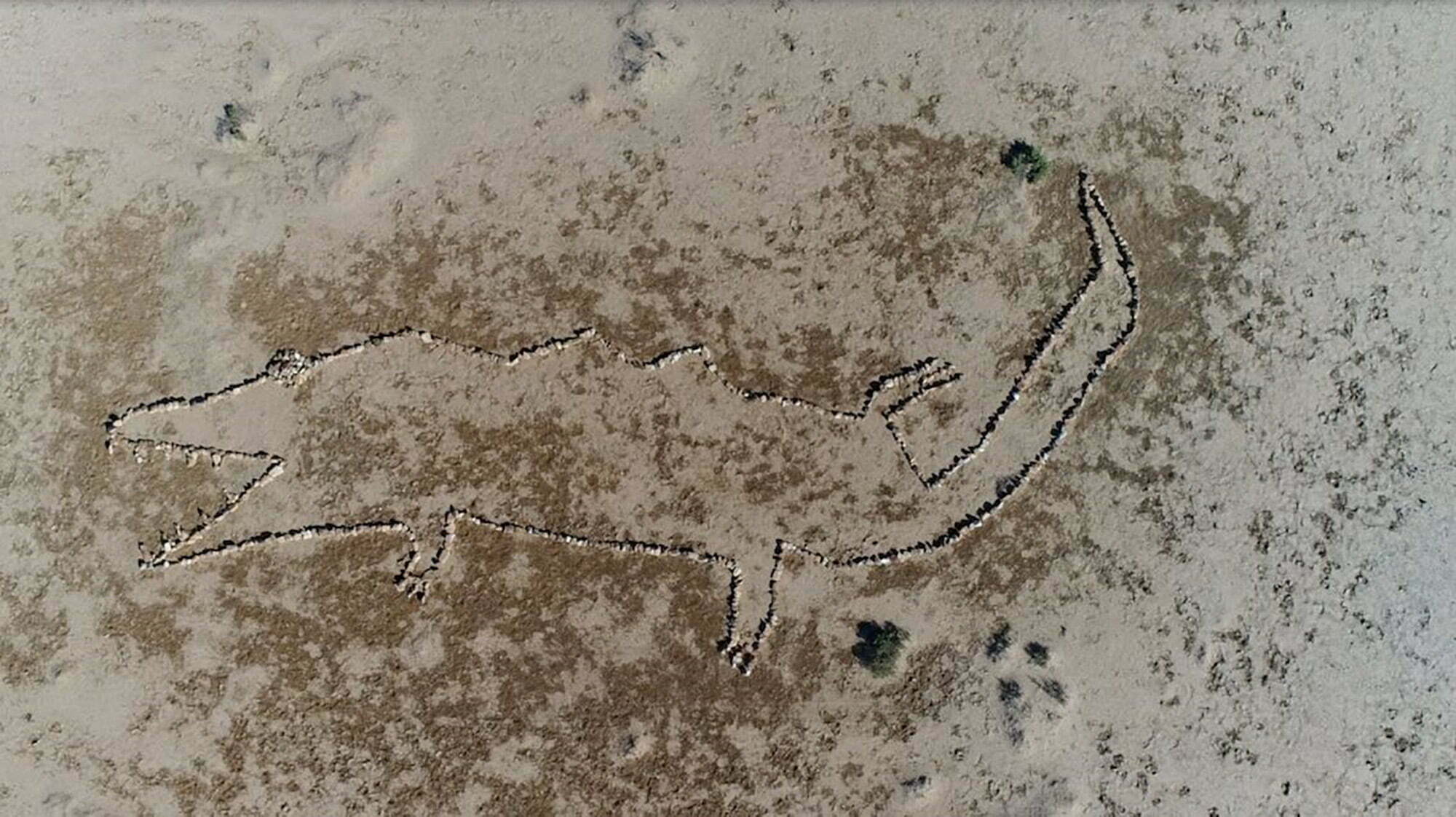 Image of crocodile taken at Narran Lakes at an open day in 2018. Photo: University of New England

Quickly Byamee hurled one spear after another, wounding both kurreahs, who writhed with pain and lashed their tails furiously, making great hollows in the ground, which the water they had brought with them quickly filled. Thinking they might again escape him, Byamee drove them from the water with his spears, and then, at close quarters, he killed them with his woggarahs. And ever afterwards at flood time, the Narran flowed into this hollow which the kurreahs in their writhings had made.

Byamee speared and killed the kurreahs to release his wives who came back to life. For a moment they stood apart, a dazed expression on their faces. Then they clung together, shaking as if stricken with a deadly fear. But Byamee came to them and explained how they had been rescued from the kurreahs by him. He bade them to beware of ever bathing in the deep holes of the Narran, lest such holes be the haunt of kurreahs.

Then he bade them look at the water now at Boogira, and he said:

“Soon will the black swans find their way here, the pelicans and the ducks; where there was dry land and stones in the past, in the future there will be water and water-fowl, from henceforth; when the Narran runs it will run into this hole, and by the spreading of its waters will a big lake be made.”

And what Byamee said has come to pass, as the Narran Lake shows, with its large sheet of water, spreading for miles, the home of thousands of wild fowl. 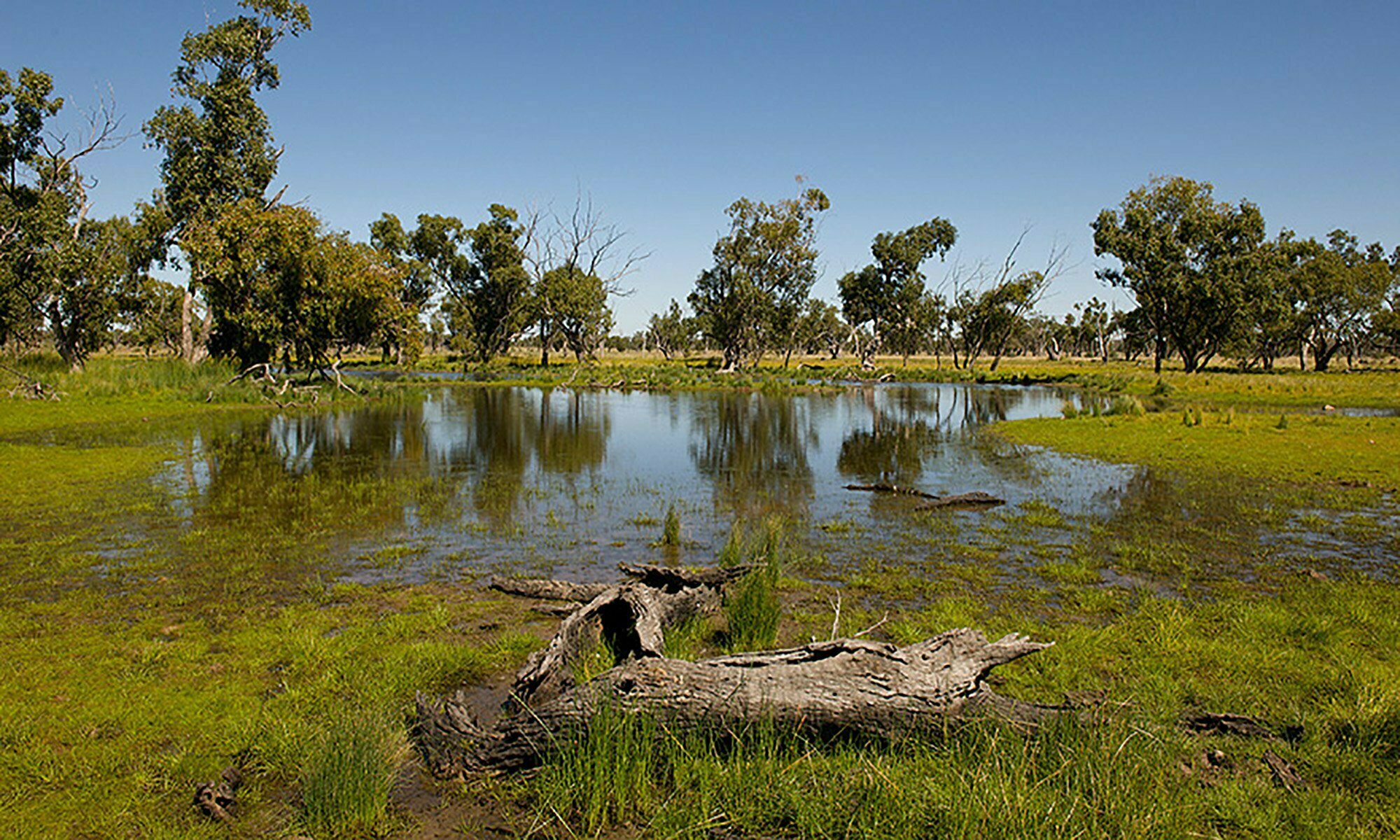 Flows continue to improve the health of Narran Lakes

As of the end of March 2020, over half of the Narran Lake Nature Reserve Ramsar Site had been inundated. After Narran Lakes fill, water will persist for months.