The Three Qualities of People I Most Enjoy Working With 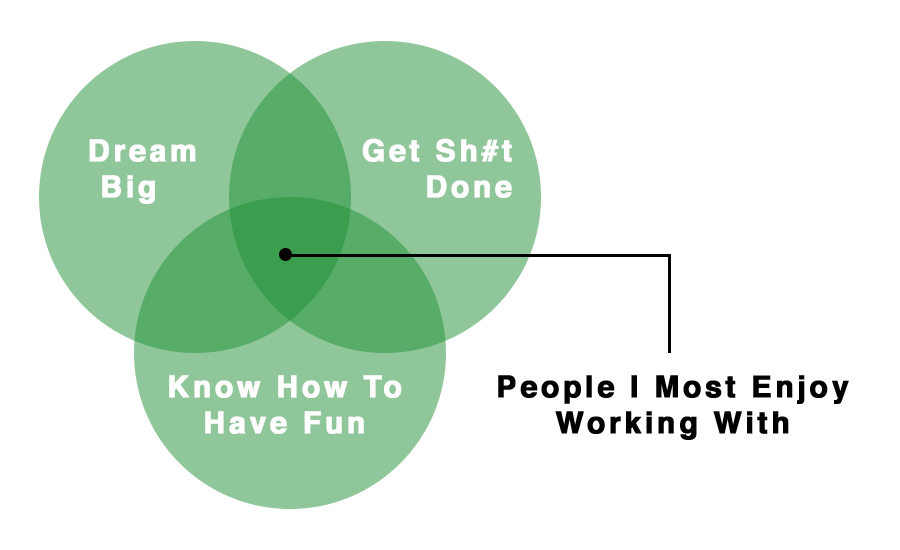 Over the holiday break my friend Adam Bester sent this great article to me about the three qualities of people he enjoys working with, letting me know that I am one such person – what a gift!  When I read the article and looked at the ven diagram that goes with it I thought, fabulous, those are the qualities I value too.

Jeff Weiner, the author of the article and creater of the ven diagram explains how he came up with the idea in the following piece.  I thought you might enjoy it as we kick off 2017 as it provides inspiration for us to find people with those qualities, as well as being a person who has those qualities.

‘It all started in a meeting where a talented team was presenting their plan for a potentially high impact initiative. Midway through, they covered the measurable results they expected to achieve in three years. Granted, they were being somewhat conservative, but their objectives were still way off what I would have expected them to be targeting based on the addressable opportunity and the assets we were bringing to the table.

Without hesitation, I challenged the team to increase their long-term goal by roughly 20x. Regardless of whether or not they could hit the target (which I think they can), the point was to get them thinking much bigger, without constraints, and to start by asking the question, “What would it take…?”

Oftentimes, my favorite exchanges are with people who are naturally predisposed to think at truly massive scale and without limitations. When well reasoned, that kind of vision can be highly inspirational, change the way teams solve for a specific opportunity or challenge, and ultimately, transform the trajectory of a company. During this particular meeting, I ended up writing down two simple words to capture this quality: “Dream big,” with the intention of cascading the theme more broadly.

Almost immediately after seeing those words in writing, I realized the message was incomplete.The team leading the discussion that day may have been conservative in their approach to articulating what was possible, but they were also highly capable and credible — and had a proven track record of delivering results. Demanding excellence is an important value for us. It’s something I would never want taken for granted or crowded out by the singular objective of thinking at scale. Asking people to dream big without delivering on the vision was not only an incomplete sentiment, it could carry the unintended consequence of producing pie-in-the-sky thinking without anything to show for it.

If a goal is truly visionary, it’s going to be confronted by doubters, skeptics, and those threatened by its realization. As a result, there will always be walls put up on the way to achieving the objective. Some of the most capable people I’ve worked with know how to go over, around, or straight through those walls by virtue of their resourcefulness and sheer force of will. In other words, they just “get sh*t done.”

I added those three words to my notes, drew overlapping circles around “Get sh*t done” and “Dream big”, and thought about how invaluable it is to work with people at the intersection of the two.

Know How to Have Fun

It then occurred to me that I’ve known a number of people who embodied the ability to dream big and get sh*t done, but who also proved very difficult to work with. Perhaps shielded by the immense value they brought to their respective organizations, they never cultivated the ability to manage compassionately, or even cared to. Rather, they did things their way and expected everyone around them to adapt accordingly. More often than not, that’s exactly what people did.

While this has clearly proven to work at some now legendary companies, it’s not an easily scalable or reproducible model, it’s not necessary, and in my opinion, it’s not fun (I say in my opinion because there are those who will argue that winning is fun, regardless of the means employed).

I’ve reached a point in my career where I want to be surrounded by people who not only share a vision, but a genuine commitment to upholding their company’s culture and values. They are team players, don’t take themselves too seriously, and “know how to have fun.” And with that, I added a third circle to the Venn diagram.

At the nexus of these three circles are the people I most enjoy working with. I’m extraordinarily grateful to have the opportunity to do that every day.’

I agree with Jeff, I have fabulous people I work with and I actively seek out those people who make me feel valued and who inspire me to dream big.  I am good at getting sh*t done, and I also know how to have a good time.  Welcome to 2017, may you dream big, get sh*t done, and have some fun!

dream big, get stuff done, have fun, three qualities of people I enjoy working with