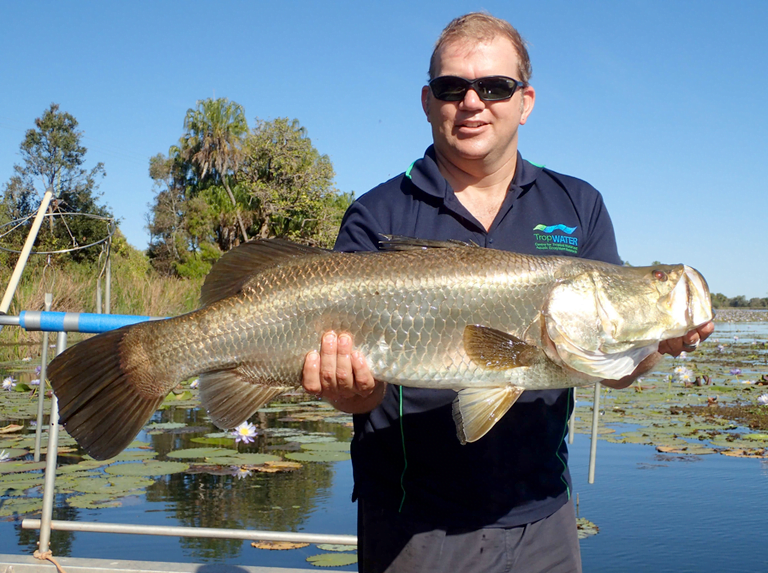 The Wondrous Waterholes of Northern Australia

New research from the TropWATER team of  Jim Wallace, Nathan Waltham, Damien Burrows and a CSIRO colleague, Dave McJannet has studied the thermal regimes of waterholes that form during the dry season in the ephemeral rivers in the Flinders and Gilbert catchments.  These waterholes provide an essential refuge for the survival of aquatic species, some of which are unique to the region. Some of these species may come under threat if climate warming raises the temperature of dry season waterholes beyond their thermal tolerance levels. However, there are no comprehensive data on the temperature regimes in waterholes in northern Australia, so the current TropWATER study was initiated to record their existing temperature regimes and also to model how these might change under a future climate.

The study found that fish (and other aquatic species) in these waterholes are exposed to high temperatures during the long dry season and these occasionally exceed levels that are detrimental to growth and survival. Furthermore, climate warming may significantly increase the amount of time species are subjected to excessive temperatures and the least tolerant may decline in abundance or even become extinct. The variable perturbations to the different trophic levels may also have unknown consequences for the aquatic species assemblages in these rivers.

Photo 1. An in-stream waterhole in the Flinders River on 18 September 2012

TropWATER’s work in this area is continuing and a key direction of our future research is to assess the additional effects that water use for irrigation may have on these waterholes. The concern is that pressures to develop irrigated agriculture in the region may add an additional strain on the already vulnerable freshwater species in this part of Australia. This challenge is not unique to Australia, but will be an emerging challenge for many developing countries around the world.

Photo 2. The same in-stream waterhole in the Flinders River as above, but 3 months later on 19 December 2012

Since the thermal tolerance of tropical fish (and other) species are currently not very well know, scientists at TropWATER are also carrying out temperature threshold experiments on a range of aquatic fauna in a custom made laboratory facility. Our existing waterhole thermal model allows for new thresholds to be inserted as they are derived, so that the implications of perturbations to waterhole temperature by irrigation water extraction and/or climate change can easily be recalculated based on our new experimental temperature tolerance data.

This article is reproduced from TropWATER’s December newsletter.  The link to the scientific paper is below: