We understand that sometimes it is difficult to see the big picture of what is happening in the environment. How can something we do today impact the future? Does it really matter? Here at the ARRC, we know that it does matter, that the decisions we make today will have a profound influence on how our world will look decades from now.  We also understand the importance of raising awareness about the need to make positive decisions for our environment today, to help to safeguard it for the future.

To help to clarify this big (and sometimes daunting!) concept, we thought we would share an article that we came across. The article, written by Prof. Ian Cartwright (Monash University) is a report on recent projects that he conducted with Uwe Morgenstern (GNS, New Zealand) and Dr Harald Hofmann (Univeristy of Queensland) to look at the influence of rainfall variations on headwater streams. 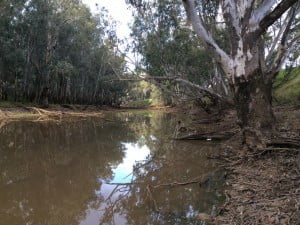 The projects were conducted in south east Australia, focusing on the upper Ovens Catchment in Victoria. The aim of the projects was to understand water transit times (the timescales over which rainfall is transmitted through catchments to streams) in order to better understand catchment hydrology and to protect, and more effectively manage, river systems. This was done by measuring tritium levels in the water, that enable the transit time of water contributing to streams at specific flow conditions, to be determined.

The studies found that transit times in headwater catchments at baseflow conditions vary from a few years to several decades, and that at higher streamflow conditions there is a significant fraction of “old” water present. The term ‘”old” water’ refers to groundwater, and water previously stored in soils, weathered rocks or fractures. It is likely that the abundance of “old” water is caused by rainfall displacing water from these stores and increasing groundwater inflows into streams due to hydraulic loading. This is crucial, as it implies that these streams are buffered against rainfall variations on timescales of a few years. Furthermore, it helps to understand why these streams continued to flow through the 1996-2010 Millennium drought.

The research also found, however,  that the impacts of changes to landuse in catchments or longer-term rainfall changes may take years or decades to manifest themselves in changes to streamflow or water quality.

This finding shows how the decisions made today will influence the future of our rivers, and that it may take many years for these to manifest themselves.  Taking the time to make an informed decision that weighs up potential consequences, both positive and negative, as well as the timeframes over which these consequences can occur, is vital.